Dr. McGaurn knew by age eleven she was going to be a Chiropractor. For some it is a profession, for Dr. McGaurn it is a legacy that began with the birth of her brother Dennis.

Delaying births until the attending doctor arrived was a common practice used in many hospitals in the late 1940s and into the early 1950s. In Dennis' case his head had crowned and birth was imminent yet the doctor was not there. The nurse turned his mother on her side and lay across her body to stop the labor. Forcing the delay of his birth eight hours, Dennis was born severely mentally and physically disabled. And his family forever changed. By age five Dennis was still unable to feed himself, potty train, or speak. His parents would take shifts day and night caring for him. He would only sleep for minutes at a time, had frequent bouts of strepp throat and up to 10 seizures a day while on seizure medication.

While visiting the McGaurns next door neighbor, a chiropractor by the name of Dr. John Cavallo, noticed Dennis outside with his Mother. Dr. Cavallo felt he could help Dennis and introduced himself to the family. Within two weeks of regular chiropractic adjustments Dennis was able to climb on the table himself, began feeding himself, potty training and dressing himself! Within months the seizures stopped and Dennis was weaned off the medications and his immune system improved dramatically!

Witnessing Dennis' miraculous improvements Daniel McGaurn quit his two jobs to attend the Palmer College of Chiropractic. And so it began? to date 12 McGaurn relatives are Chiropractors adjusting spines and educating thousands to the benefits of regular chiropractic care.

Dr. McGaurn earned her undergraduate degree from St. Thomas Aquinas in Sparkill, New York and graduated from the Pennsylvania College of Chiropractic in 1984. She remains current with all forms of chiropractic and natural health care through on-going continued education and conferences. Dr. McGaurn is certified by the International Chiropractic Pediatric Association (ICPA).

"My primary goal is to empower my patients to trust the Innate Intelligence of the body and understand the body can heal itself to the best of its ability when the nervous system is free from interference," states Dr. McGaurn.  Chiropractors are trained to detect and aid the body in correcting even the most subtle vertebral subluxations that interfere with the most important system in the body the Central Nervous System. 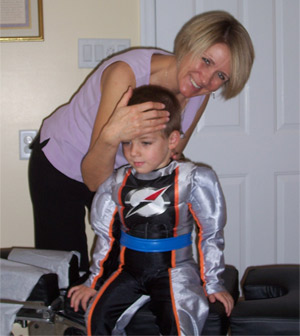